On a very snowy Saturday night in January we were treated to the latest Centre Stage offering in Stoke Golding Village Hall. The name 52 Skidoo 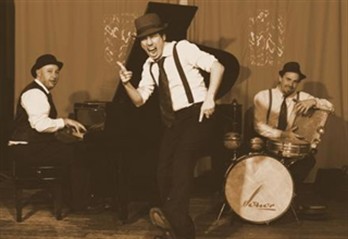 gives little away but in a magical evening of entertainment we were transported across the Atlantic and back in time to the era of the 1920’s Speakeasies of the Southern USA.
The Trio of Tommy on vocals, Henry on the piano and Howard on percussion and clarinet, told a story of the time cleverly woven around the hits songs of the 20’s. We were invited to a rent party where struggling musicians would ply their trade to pay the rent, probably to some seedy landlord and certainly for some less than salubrious accommodation. You could really sense the desperation of American in the prohibition age.
Although some of the songs would not have been familiar to many, there were classics such as ‘Georgia on my Mind’, ‘When the Saints go marching in’, ‘When you’re smiling’ and a powerful rendition of ‘Sweet Georgia Brown’ that would have got even Douglas Bader tapping his… well you get the idea.
The standard of musicianship was exceptional with some of the percussion and piano playing drawing bursts of spontaneous applause from the appreciative audience. It really was entertainment of the highest order and we are so fortunate to have the opportunity to see this on our own doorstep and for the price of a couple of pints of beer. These things do not happen by chance and thanks to Alan for bringing them to us and the Centre Stage folk for making such fare available to the masses.
Some poor souls missed out because of the appalling weather but for those who braved the elements, I am sure the event will live long in their memory. If you did turn out and didn’t enjoy it then I’m sorry boy but you ain’t got no soul!
Graham Grimley