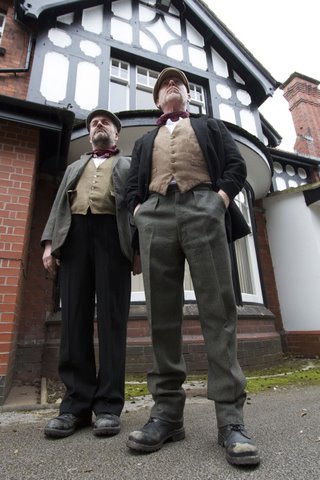 What a treat! The Ragged Trousered Philanthropists came to the village hall and the performance was fantastic! The two-hander was performed by the fabulously named Fine Time Fontayne and Neil Gore, two very competent character actors who, between them played all the parts. The play was an adaptation of the 1914 novel by Robert Tressell, a searing indictment of capitalism and the extreme poverty of Edwardian England. The novel is a classic and this play did it justice. The protagonist, Frank Own explained to his workmates, all engaged on the renovation of a fine three storey house, how money itself was the root of their poverty, since they were striving to earn it, only to spend it in the shops, owned by the wealthy few. Indeed, it is the workers themselves who are the “philanthropists” of the title since they throw themselves into back breaking work for meagre wages, which then generates profits for the bosses. The evening was fun and fast. And two lucky members of the audience even got a copy of the novel, as a reward for their participation. This travelling theatre company, Townsend Productions is well worth seeing, look out for them.
Chris Taylor