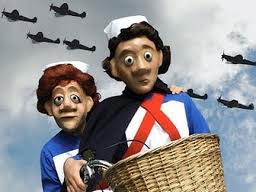 This sell-out show provided an unusual, but fantastic evening of entertainment at Stoke Golding Village Hall. Nursing Lives told the story of nursing during the second world war through masked mime, which was very cleverly put together to portray the times with just the right amount of humour, poignancy and suggestion. Incredibly only 3 actresses were involved in the show, playing several characters each from the formidable matron to the cheeky demolition men. ]

We were treated to dance, music, puppetry and inventive scenery adaption which kept us all enthralled throughout the performance. Bob White, one of the older residents of the village, summed the evening up brilliantly when he went to congratulate the three actresses back stage and told them it was “the best seven quid I have ever spent!”