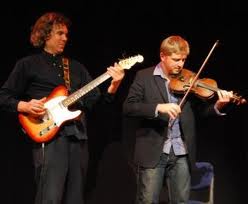 It is very difficult to describe the musical evenings in Stoke Golding without drifting off into a morass of superlatives and cliches.
However, even by the exacting standards of the acts that we have been privileged to witness so far, Chris and John were somehow in a different class. If I could use an alcohol analogy then if you set the Spice Girls as a sort of Aldi own brand Lambrusco then by comparison John and Chris would be somewhere around Chateau Lafite Rothschild 1982 (£32k a bottle if you were wondering). These are the sort of musicians who are revered within their industry, the sort who were spoken about in soft tones by the likes of John Peel and Bob Harris on late night radio shows. John has played with the great Stephane Grappelli and was a founder member of Soft Machine along with Ric Sanders who still plays with Fairport Convention. Chris is one of the most highly qualified violinists in the country both as a player and a teacher. His qualifications start with a first class honours degree from the Royal Academy of music.
Together they gave us an evening of sublime musical artistry which included a rendering of “The First Time Ever I Saw Your Face” which would have made Ewan McColl cry, and he wrote it. Conversely, with the aid of a bit of electronic wizardry, we had a version of Blue Moon as sung by Donald Duck which I like to think would have made Rodgers and Hart smile. For me though, and I am sure many others, the performance of Sweet Georgia Brown in full-on Grappelli style was the musical highlight of the year, never mind the evening. The show had a most appreciative audience on its feet and calling for more. Alan will have a hard job to come up with something to top this but I suppose a return visit from Richard Durrant, this time on a bike, is not a bad place to start.
It is impossible to fully convey the excellence of a musical evening in words, so If I may just finish with one little cliche for the benefit of those who could not attend, ‘You had to be there.’
Graham Grimley

This concert was dedicated to Chris Taylor, who died in January, and all profits from the evening have been donated to Amnesty International in her memory.
Tags:Centre StageChris GarrickJohn EtheridgeMusicShows